Hey guys! It's been a while since I last did a Hanzi-of-the-day, so today I present you with the... Fear of Ghosts.

Since the dawn of time people have feared ghosts (or evil spirits). Ghosts, or as they call them in China 鬼 guǐ, seem to be present in pretty much any culture since ancient times. The character is a pictogram that depicts a person 人 with an ugly mask 田 for face. (The "mask" is just a pictogram of a rice field, but those are details...)

So ghosts, are pretty scary, right? What would make them even more scary? You guessed it, if they are chasing after you with a stick!

Or god forbid, with a branch predictor...

The Chinese, rightfully so, thought that this was pretty fuckin scary. So this why the character for fear 畏 wèi is literally a ghost holding a stick... 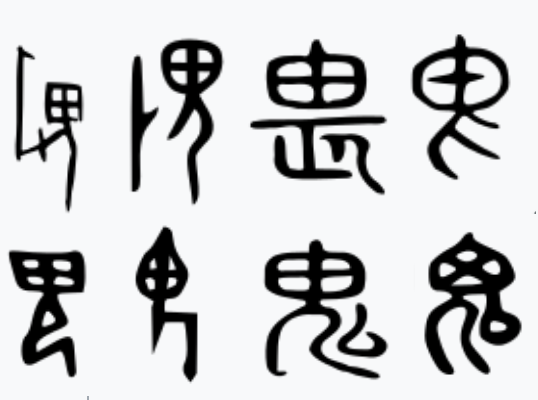 The evolution of the ghost character (bottom) and the ghost holding a stick.

In modern Chinese one of the more common uses of the word ghost is as part of a series of pejorative terms for Westeners, because we are as pale as ghosts.
Examples include:

That's it from me guys! Remember, if someone chases after you with a stick, it means they are probably a ghost.

What does everybody like? That's right, money. What symbolises money? Gold...

In my previous post I talked about my new application imageSelector. This week I will talk about the development process. It all started during a long journey I took across